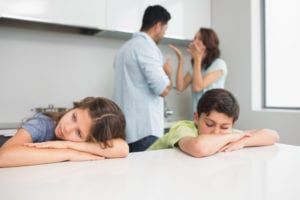 Does getting divorce mean that your children’s marriages are more likely to fail?

It is a commonly accepted “truth” that the children of divorced parents are more likely to get divorced themselves. After all, it seems that with a rising divorce rate here in the US and the fact that children learn behaviors and lifestyles from their parents, this would be an incontrovertible truth. But as it turns out, this may something of an urban legend, along with other beliefs like “lightening never strikes the same place twice” and “urine alleviates the pain of jellyfish stings.”

For years psychologists have believed that children whose parents get divorced are themselves more likely to suffer through failed marriages, but a recent study published in the Marriage and Family Review suggests that the answer actually lies in the level of conflict children experience, and not in the divorce itself.

During the study, researchers analyzed marriage and divorce information from a significant number of American families from 1987 to 2003. The idea was to track whether or not the children of divorced parents ended up divorced themselves in more cases than not, and how unhappy marriages affected children. But what the researchers found was very enlightening, and when you think about it, also somewhat self-explanatory.

As it turns out, conflict plays a greater role in whether or not a child grows up to experience failed relationships than divorce itself. The data revealed that children who experienced high levels of conflict in their families, but not necessarily divorce, were likelier to get divorced as adults. This would involve constant fighting, high levels of stress, possible domestic violence, and the increased likelihood of verbal and physical abuse.

This may seem obvious, as constant conflict is not viewed as healthy for anyone including children, but it was the parallel findings that are so interesting. The researchers also found that children who grew up in high conflict families whose parents did get divorced, actually fared about as well as children who grew up in low conflict families whose parents stayed together. How is this possible, you may wonder? The clue it seems, lies in the conflict, not in the divorce.

Conflict, more than divorce rates, seems to be the determining factor…

The children who were most likely to end up in failed marriages later in life were the ones who grew up in high conflict families and whose parents stayed together. Which means that it isn’t divorce, it’s conflict that causes increased chances of divorce later in life. In fact, the researchers believe that divorce may actually have helped some children who would otherwise have grown up in high conflict families.

The conclusion of the study states that “children’s exposure to daily conflict is diminished after union dissolution (divorce), thus reducing children’s opportunities to model their parents’ conflictual style, which may be associated with an inability to resolve relationship conflict…This lack of ability to make resolutions or compromise may lead to their inability to have successful cohabiting or marital unions.”

So next time someone implies that you would be doing your children a disservice by getting a divorce, or that your children would be better served by parents who ‘stuck it out’ until their kids left home, remember that they don’t have all the data.

If you are considering getting a divorce and you are concerned about how it may impact your children, spend some time assessing your marriage. Give some thought to how often you and your spouse fight, and what the level of conflict is in your home. Try to determine whether or not you think this may get worse over time, or if there are ways to reduce it. Because it is the conflict in your home, far more than the possible divorce, that will impact your children’s future.

Surrogacy For Same Sex Couples in Michigan 3
Divorce Court 101: A Look At What To Expect in a Michigan Divorce Court

Brandy Thompson is an angel through and through. She is not an aggressive attorney, but fearlessly defended me. Brandy has a voice of fairness that commands attention, and a laser sharp wit. She navigated my best interest hearing like an artist, shining a spotlight on those areas that were necessary for all parties to see that my boy deserved an upbringing with two loving parents, and the judge agreed. I wish I could give more stars than 5. Thank you!!!!